Justice Giwa Ogunbanjo of the Federal High Court, Abuja, on Tuesday, December 1, 2020, threw out the application of Patrick Are, second defendant in the trial of former director-general of National Broadcasting Commission, NBC, Emeka Mba, and four others for alleged N2.9billion fraud.

In throwing out the application in a trial-within-trial, in which Are sought the rejectionof the testimony of Abubakar Madaki, a prosecutor with the Economic and Financial Crimes Commission, EFCC, the judge stated there was no reason why the testimony should not be admitted in evidence, since the applicant failed the test of burden of proof in the trial.

“I therefore overrule the second defendant’s objection to the admissibility of the statement; such is to be tendered in evidence. The said statement is therefore tendered and marked accordingly”, the judge said.

Are’s application failed for his failure to prove his claim that he did not write his statements in EFCC’s office out of his own volition, but was traumatized and coerced by Madaki into doing so.

Mba and Areh, alongside Basil Udotai, Babatunde Amure and a company, Technology Advisors, according to EFCC spokesperson, Wilson Uwujaren are facing prosecution by the EFCC, for alleged diversion of N2.9 billion, meant for the purchase of setup boxes for digital switch-over from analogue broadcasting in the country. 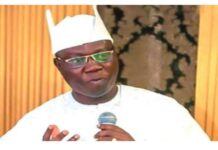 War on the Oodua front – Akeredolu

My house was set ablaze by my people Sunday Igboho says

Sunday Ignoho – If politician don’t stop talking trash about me,...

December 6, 2020
We use cookies to ensure that we give you the best experience on our website. If you continue to use this site we will assume that you are happy with it.Ok