The News Agency of Nigeria reports that Ribadu was conferred with the award at an event organised by the prestigious Sheikh Tamin Bin Hamad Al Thani International Anti-Corruption Excellence Award 2018, during its third annual ceremony in Malaysia on Friday.

According to a statement by the President’s Special Adviser on Media and Publicity, Mr Femi Adesina, in Abuja on Saturday, Buhari rejoiced with the pioneer chairman of the EFCC over the award.

He said: “The award to Ribadu affirms our commitment to the campaign against corruption, which is one of the three focal areas of our administration.

“This also means that the world appreciates our determination to stem the negative effects of corruption on the country’s development.’’

He urged the current leadership of the anti-corruption organisations in the country not to be deterred in the face of “corruption fighting back in different forms and shapes”.

Buhari also enjoined all Nigerians in leadership positions to emulate Ribadu and see public office “as a public trust’’.

Ribadu, a native of Adamawa State, was the pioneer chairman of the EFCC and was once adopted as the presidential candidate of the Action Congress of Nigeria in January 2011.

The former EFCC boss, who defected to the Peoples Democratic Party before he later joined the All Progressives Congress recently participated in the governorship primaries of the APC in Adamawa.

He however lost to the incumbent governor of the state, Sen. Bindow Jibrilla. 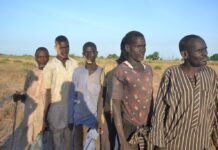 2023: Ike Ekweremadu Reveals How Igbo Presidency can Be Achieved

August 13, 2017
We use cookies to ensure that we give you the best experience on our website. If you continue to use this site we will assume that you are happy with it.Ok