Esheshi, who led several of his supporters to APC on Saturday in Opkella, was received by the state Deputy Governor, Mr Philip Shaibu.

Addressing the gathering, Esheshi said that he decided to return to the APC after settling his misunderstanding with the leaders of the party.

He described his defection as a welcome back home, adding that it was time they all worked together as one to fast-track the development of the state.

He called on the electorate to vote for all the APC candidates in the 2019 general elections.

In his remarks, Shaibu assured all the defectors that the APC is one family and that they were welcome back.

He urged all to work with one mind towards ensuring success for the party at the polls. 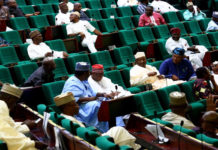 March 7, 2018
We use cookies to ensure that we give you the best experience on our website. If you continue to use this site we will assume that you are happy with it.Ok