Belgore, a former PDP campaign coordinator in Kwara State, said the instruction to do so was made in writing by Kwara stakeholders of the PDP before the 2015 polls.

The lawyer and a former Minister of National Planning, Abubakar Sulaiman, are standing trial on a money laundering charge preferred by the Economic and Financial Crimes Commission (EFCC).

Belgore concluded his testimony in defence of the charge on April 12, following which the court adjourned for cross examination.

At the last adjourned date on May 6, a second defence counsel, Mr Tayo Oyetibo SAN concluded his cross examination of Belgore.

Under cross examination by Oyedepo, the defendant told the court that the stakeholders also authorised the formula for the disbursement.

According to him, the decision to disburse the campaign funds and the list of recipients was made at a meeting of the state’s PDP stakeholders.

He explained that he did not give any written instructions to share the money to the stakeholders, contending that the instructions came from his party.

He said he did not have a copy of that instruction.

The defendant denied that N80 mIllion was apportioned to the campaign coordinator or his office, contending that funds allocated were on the stakeholders’ instructions.

Belgore said the stakeholders’ meeting was to allocate funds to Local Governments and their Chairmen and that the funds were to be given to the Chairmen and representatives, adding that he was not aware if it was changed.

He confirmed that at the stakeholders’ meeting, people were nominated to collect monies, but denied knowledge about collection of the said monies as he was not there.

Justice Rilwan Aikawa adjourned till June 17 for continuation of cross examination by the prosecution.

In the nine-count charge, the EFCC alleged that a former Minister of Petroleum Resources Diezani Alison-Madueke, conspired with Belgore and Sulaiman on or about March 27, 2015, to directly take possession of the sum of N450 million, which they reasonably ought to have known formed part of proceeds of an unlawful act.

They were also alleged to have taken the said funds in cash, which exceeded the amount authorised by law, without going through the financial institutions. 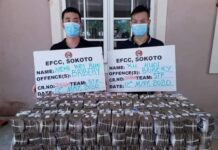 October 24, 2018
We use cookies to ensure that we give you the best experience on our website. If you continue to use this site we will assume that you are happy with it.Ok