Stunning goals from Jamie Vardy and Rihad Mahrez were enough to earn Leicester City all three points against Tottenham. Harry Kane grabbed a late consolation goal for the visitors, although a host of wasted chances proved to be pivotal in their 2-1 defeat.

The game started at a frantic pace, both teams playing at a high tempo in both their pressing and passing as Leicester and Tottenham looked to make positive starts to the game in front of a boisterous crowd at the King Power Stadium.

Leicester almost took the lead on the ninth minute with a powerful Wes Morgan header which was cleared by Danny Rose who was defending the front post for Spurs, as the Foxes settled into the game.

Their fast start was soon rewarded with the opening goal inside 12 minutes. Marc Albrighton delivered an in-swinging cross from the left which picked out Vardy, who brilliantly looped his first-time effort on the stretch over a helpless Hugo Lloris for his seventh Premier League goal of the season, giving Leicester a 1-0 lead.

Spurs responded well after the early setback and almost found an immediate equaliser, but Moussa Sissoko’s strike was half-saved by Kasper Schmeichel, before Vicente Iborra finished the job to clear off the line for the Foxes.

There were no signs of any letup in intensity from both sides as half chances for Harry Kane and Wilfred Ndidi came and went in what was an engrossing first 30 minutes of the game.

Tottenham then had a brilliant chance to equalise on the counter following a Leicester corner. Christian Eriksen eventually found Dele Alli, who could only fire straight at Schmeichel with only the goalkeeper to beat, as the visitors began to see more of the ball than their hosts.

Leicester were now camped in their own half as Tottenham dominated the ball and territory without testing Schmeichel. For all of Tottenham’s play however, they were heading into the break 2-0 down courtesy of a spectacular Rhiad Mahrez goal.

The Algerian cut inside from the right, before whipping a delicious effort in the top right corner of Lloris’ goal from the edge of the area in what was the last kick of the first half, with Claude Puel’s side two goals to the good in what was a pulsating half.

Mauricio Pochettino and Tottenham now had it all to do in the second half if they harboured hope of returning to north London with anything.

Instead, it was Leicester who looked more likely to score after the restart, with Shinji Okazaki directing his header over following some promising buildup play from Puel’s side.

Spurs looked to rally as they pressured the Leicester defence, although Schmeichel and the back four in front of him held firm, resisting the pressure the visitors were beginning to apply, whilst the threat of Vardy and Mahrez the counter still gave Spurs something to think about defensively.

With 15 minutes to go, Tottenham and Eriksen wasted a golden opportunity to get themselves back into the game. The ball fell to the Dane after a cross to substitute Fernando Llorente, but the play maker lacked the composure usually associated with him and lashed his shot wide from just six yards out.

It wasn’t long before Spurs did then find a way back into the game, courtesy of their talisman

Harry Kane. He was played in by a neat pass from Erik Lamela, before the England forward rifled into the top corner past Schmeichel to half the deficit with 10 minutes left to play.

They almost levelled two minutes later, but Llorente could only fire over from a Serge Aurier cross to waste another guilt-edged chance, although now all the momentum was with the North London side.

That proved to be the clearest chance Spurs created in the final minutes of the game and despite half-hearted calls of a late penalty for Spurs, Anthony Taylor blew for full-time to give Leicester the win in a brilliant game of football. 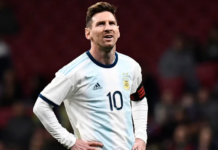 Messi Blasts Board Over Pay Cut

August 7, 2017
We use cookies to ensure that we give you the best experience on our website. If you continue to use this site we will assume that you are happy with it.Ok